On Monday 28th October we welcomed the 3rd Portchester Sea Scouts to Haslar Maritime Technology Park. The first order of the day is a safety briefing. This is the most important moment of the day. This ensures that health and safety stays at the forefront of our minds and ensures that everyone is aware of the current risks and hazards.

Ian Jennings, Ship Tank Manager, Haslar Facilities describes the importance of safety, ‘Safe for Life is what we do in Haslar. It covers anyone in our facilities visitors or otherwise. We work in an environment that could be dangerous. The thing that stops it being dangerous is the safety based culture we uphold, encourage and deliver on.’

Chris Richardsen, Principal Consultant, Mechanical Engineering briefs the scouts on the legacy of the Haslar site and how it came to be.  He explains that it all started with a gentleman called William Froude who was an English engineer, hydrodynamicist and naval architect. He built the original ship tank in 1872 on the land adjacent to his house in Torquay, Devon.  After the passing of William Froude, it was his son Robert Edmund known as ‘Eddie’ who continued the amazing work William started.  With land value increasing Eddie sought a new home for a ship tank and found a plot adjacent to a gunboat yard in Haslar. The last test completed in Torquay was done on 5th January 1886 and the staff started work at the new facility known as ‘Ship Tank 1’ on 6th February 1886.

Ship Tank 1 was used intensively from the outset and all of the major classes of British warship that fought in World War One were tested at ‘model scale’ in the tank at Haslar. By the time Eddie retired in 1919, around 189,000 model test runs had been completed at Haslar. A staggering achievement by any measure.

With increasing demand for a combination of surface ship and submarine experiments, the tank at Haslar soon reached capacity during the early inter-war years. The Admiralty approved the construction of a second, larger tank at Haslar, which was built at right angles to the first. This new tank was known as No.2 Ship Tank.

Chris explains that when the site was moved from Torquay to Haslar, Eddie, as a sentimental gesture poured some water from the Torquay tank into the new Ship Tank 1. This has now become a tradition known as ‘mixing the waters’ which happens by pouring a small flask of ‘Froude Water’ into the Ocean Basin. This was last done when HRH The Princess Royal visited the site in October 2018.

Next Stop – The Towing Tank measuring 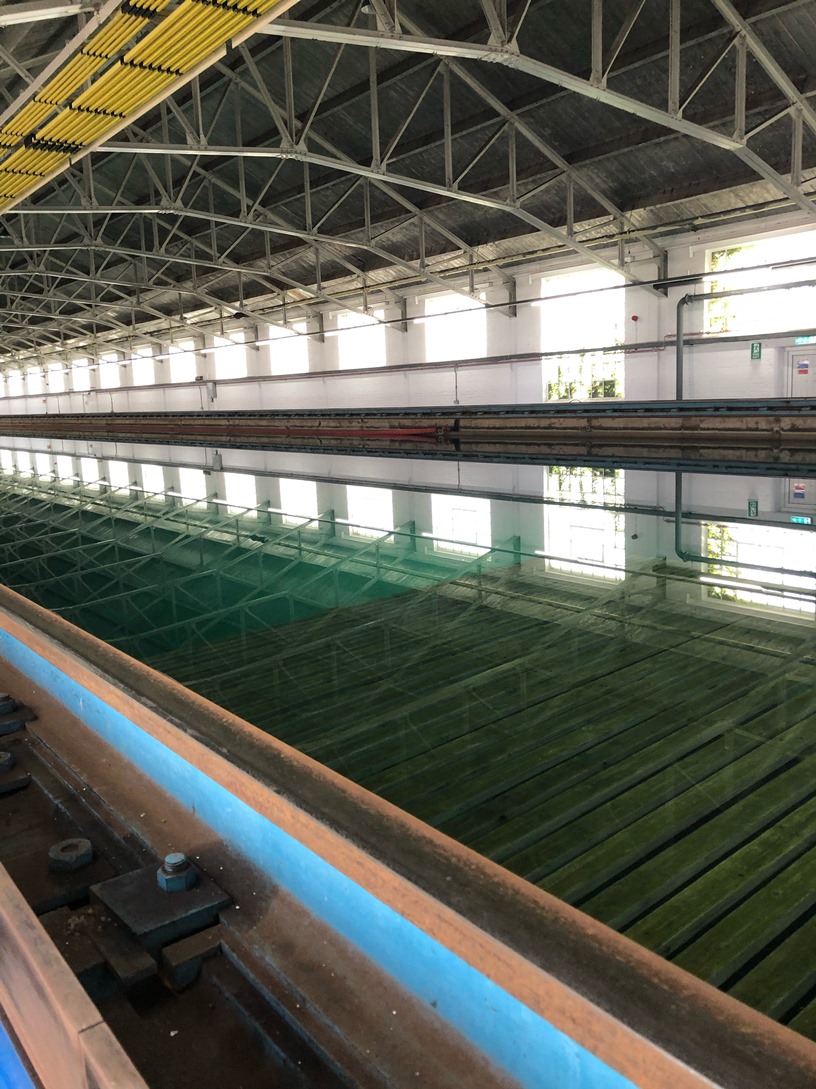 The towing tank, a whopping 270m x 12.2m x 5.4m,  was designed for constrained hydrodynamic model tests of surface ships, submarines, offshore structures and renewable energy devices.  Interestingly, the tank was used by the Great Britain’s sprint kayak team during their preparations for the London Olympics in 2012.

The facility is equipped with a test preparation area, a large dry dock and a 2 tonne crane. 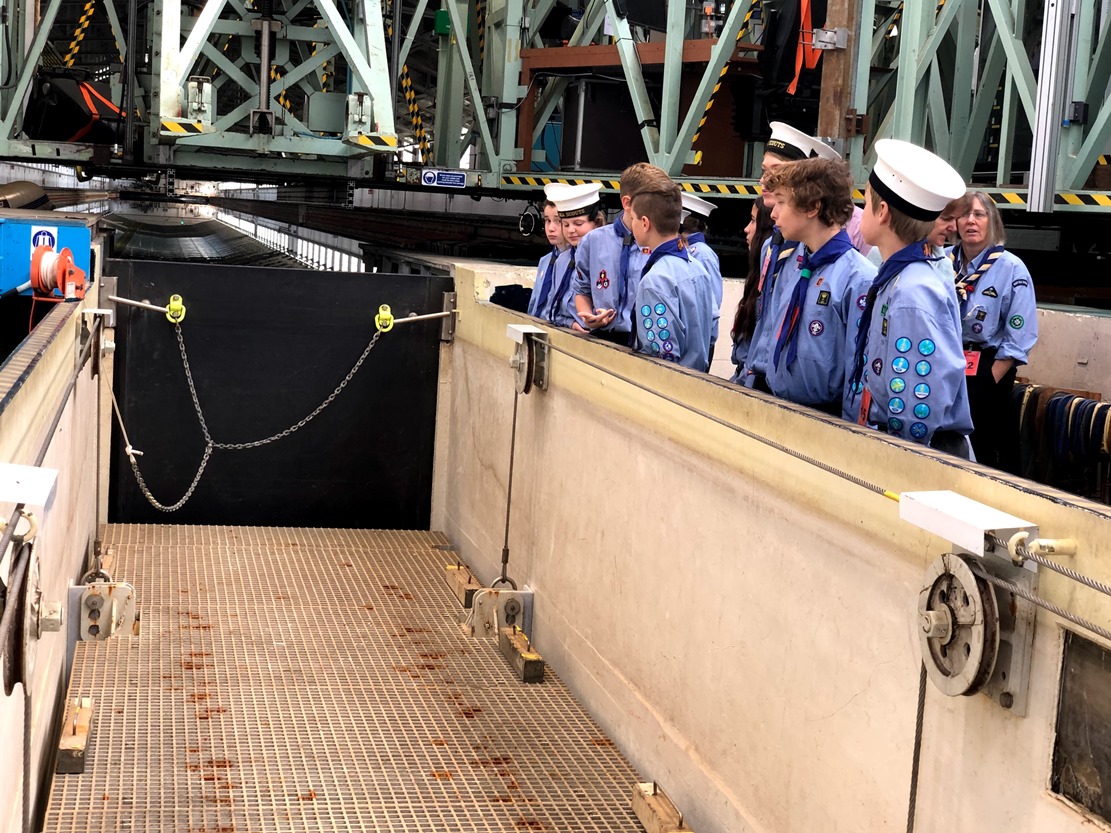 Next Stop – The model of HMS IRIS

Eddie had a wax model of HMS Iris made; he wanted to make sure that all the model results correlate.  After this, the use of standard models became a worldwide practice and the third Iris model was made from brass plate to ensure it permanency. This is housed in the Ship Tank, as seen the photo above. Eddie continued the work of his father William who was the founder of the Froude Number.  This equation determines the resistance of an object moving through water and permits the comparison of objects of different sizes. It is this number that allows us to accurately scale up the results from a model design to aid with ship development. 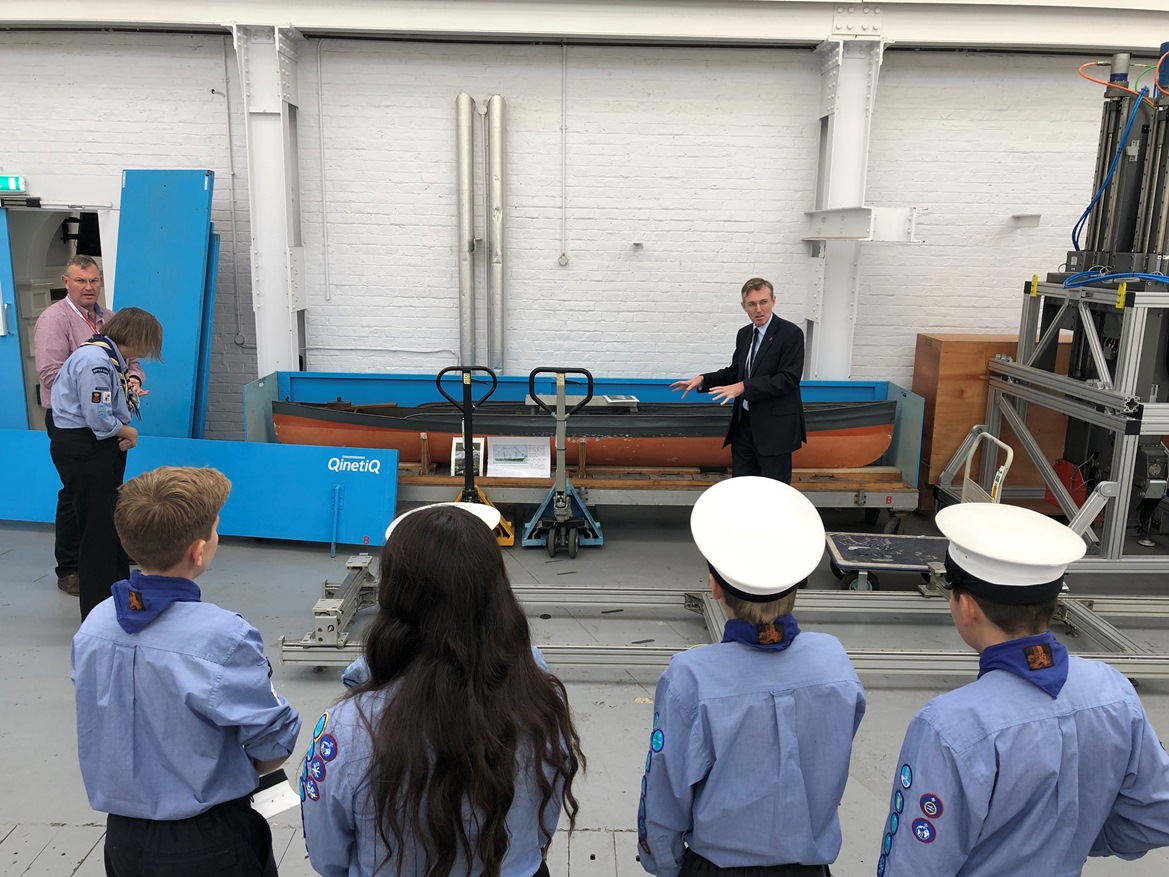 The Ocean Basin has a volume of 40,000 tonnes of clear water, which is the weight of 400 Blue Whales!

It has a length of 121m, a width of 61m and depth of 5.5m the Ocean Basin spans a surface area greater than the pitch at Wembley Stadium and allows testing of large or high speed models. The basin contains 122 individually activated wave making paddles that are capable of recreating any sea state in the world at model scale.  It also has state-of-the-art infra-red motion capture technology which uses 19 cameras to track and log the position of up to 5 models simultaneously!

The LSSL enables our dive experts to forensically analyse dive experiments by understanding how it works in the harshest conditions. 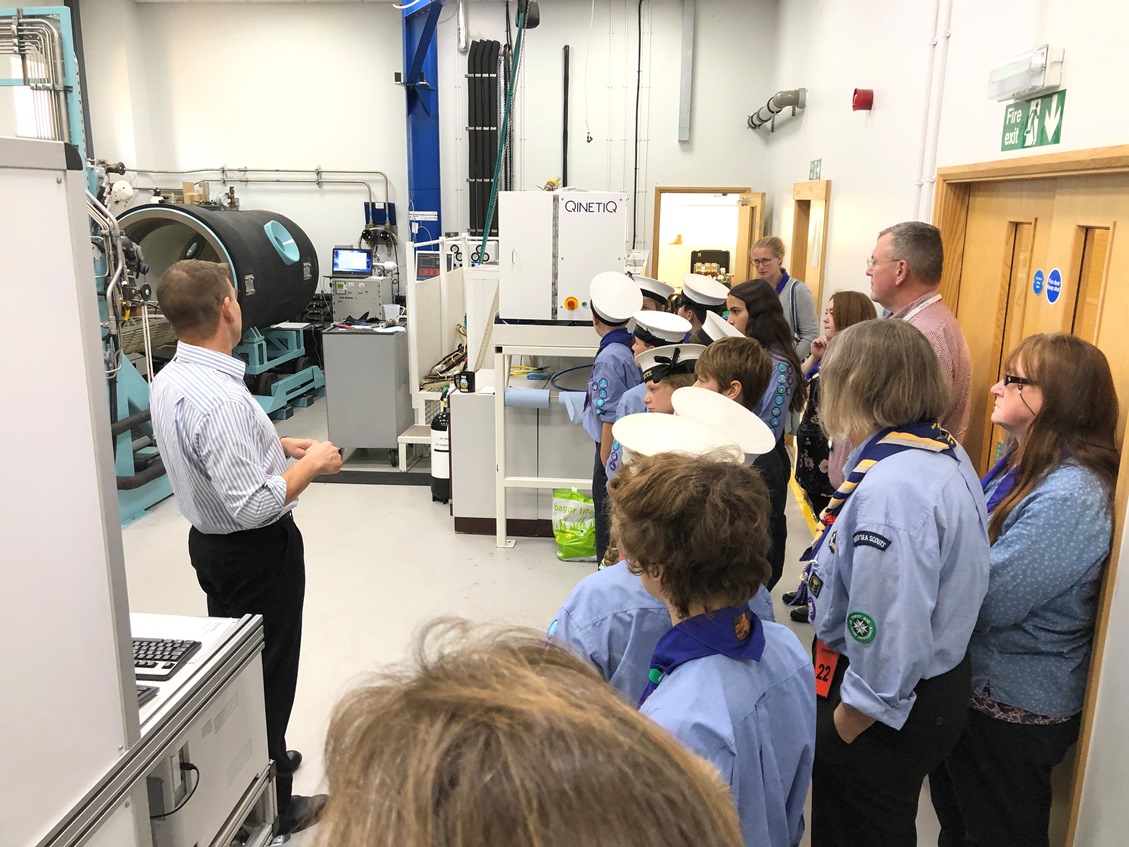 This two compartment chamber can be used for the testing and evaluation of undersea and hyperbaric systems. It specifically allows the assessment of submarine escape, diving systems and components. It is certified to test equipment to 1500m and has the ability to re-create the pressure profiles experienced underwater. 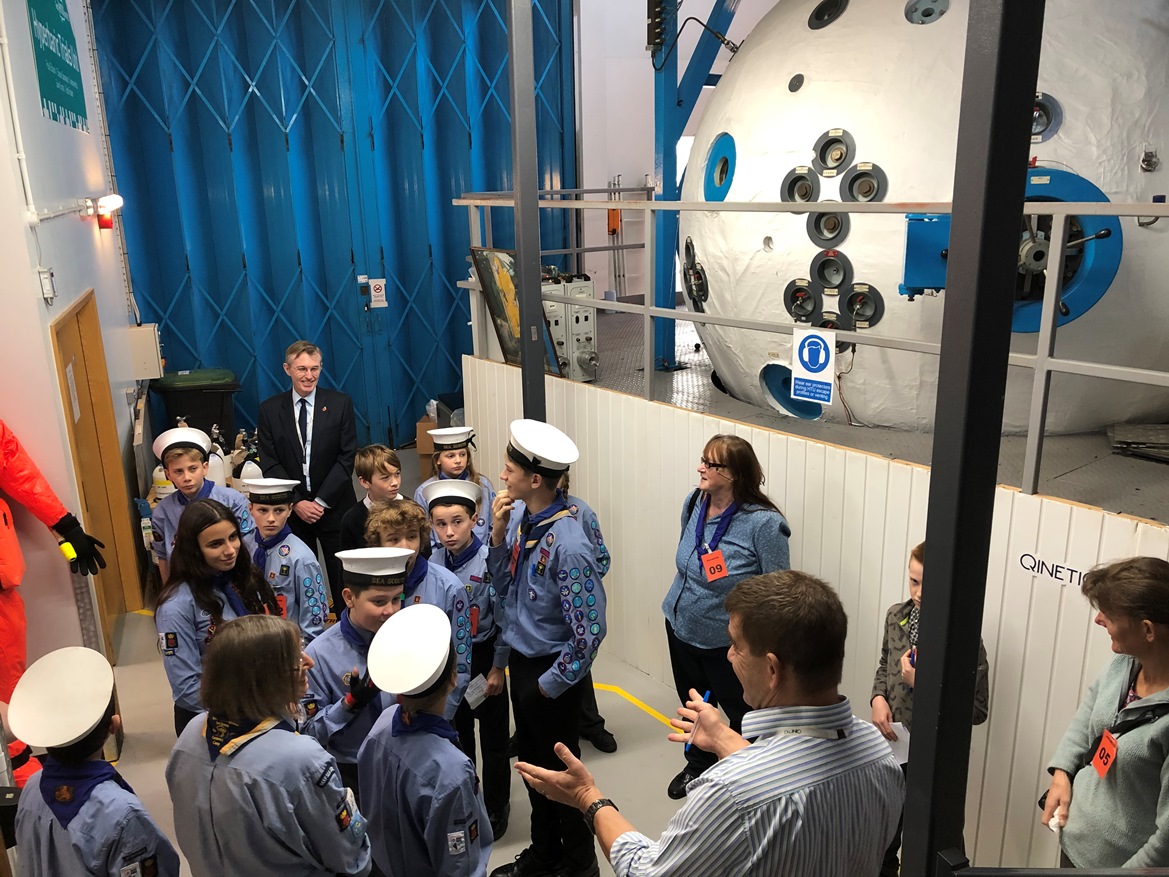 The EDT 3x3x3m enables the testing of an array of items, from insulated gloves to the endurance levels of divers. The tank can chill the water to ­2⁰c and heat it to 40⁰c. Strictly no bubble bath! 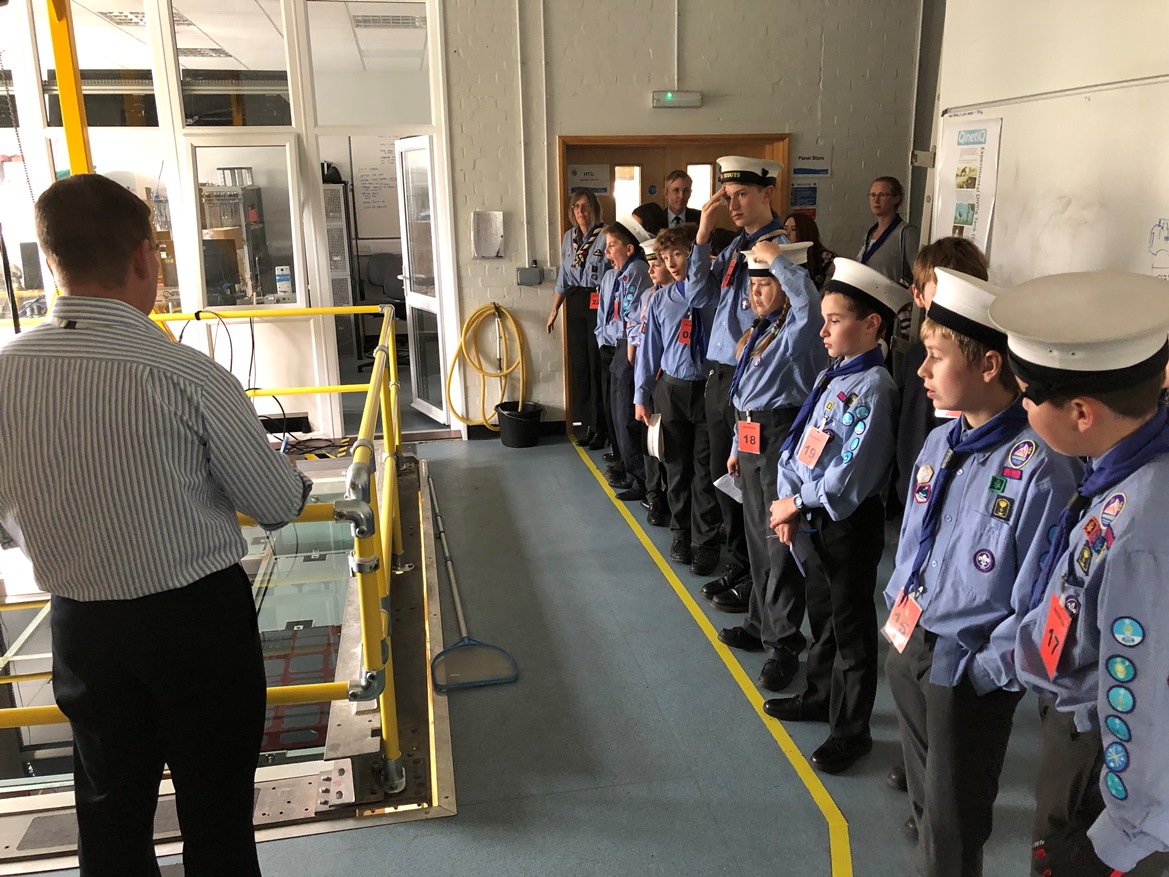 The wrap up – STEM Activities

Last order of the day was to complete some STEM based activities. These included “Archimedes Squeeze” where the Sea Scouts had to keep squeezing a piece of aluminium foil, making it in to an ever smaller sphere until the forces in play could not keep the sphere buoyant and it sank!

Peter Leach who is one of our Software Engineers and a Scout Leader at 3rd Portchester wraps up by saying:

“Finding nautical related activities can often be a challenge during the winter months, but this opportunity did not disappoint in the slightest. Including activities such as the visit to these amazing facilities into our programme helps us with being more inclusive of all their individual interests.  It also helps us to inspire them and shape their future.”

All the Sea Scouts that attended achieved the Scientist Activity Badge, which now lives on their uniform as a reminder of this unique experience.