The drone threat is varied, ranging from benign hobbyists accidentally flying in the wrong airspace to state-actors intent on causing national disruption. Capable Counter Drone systems need to provide protection against all threats, including those which have been heavily modified  to overcome conventional sensing technology.

At QinetiQ, we have been researching the drone threat and developing Counter Drone capability for over six years. Critically, we believe that radar is the most threat-agnostic drone sensor, requiring no specific communications signals to intercept, and requiring no threat library maintenance, which can reduce system effectiveness between updates. Radar is also a reliable technology against non-standard drones which are unlikely to be included in threat libraries.

Detect
Obsidian utilises a purpose-designed 3D staring radar, proving both high accuracy 3D position information and a high update rate (0.5s) – unlike scanning radars which can take several seconds to update. Using this accurate and timely threat location, we can automatically set on a range of other sensors (eg cameras) and effectors (eg Jammers, nets) saving time, and cost.

Track and Identify
As soon as a threat is detected Obsidian continuously monitors its location, setting on a high resolution day/night camera for visual confirmation. The use of ‘micro-Doppler’ radar techniques to detect drone rotor blades and Advanced Artificial Intelligence (AI) applied to the camera image also provide high confidence of the nature of the threat, minimising false alarms and maintaining business/mission continuity.

Act
Obsidian’s highly accurate and timely 3D position updates uniquely allow rapid set-on of drone defeat options, allowing them to be precisely targeted, whilst maximising safe operation. QinetiQ’s approach allows us to work with our customers and partners to provide a range of services and solutions to mission-critical operational requirements. 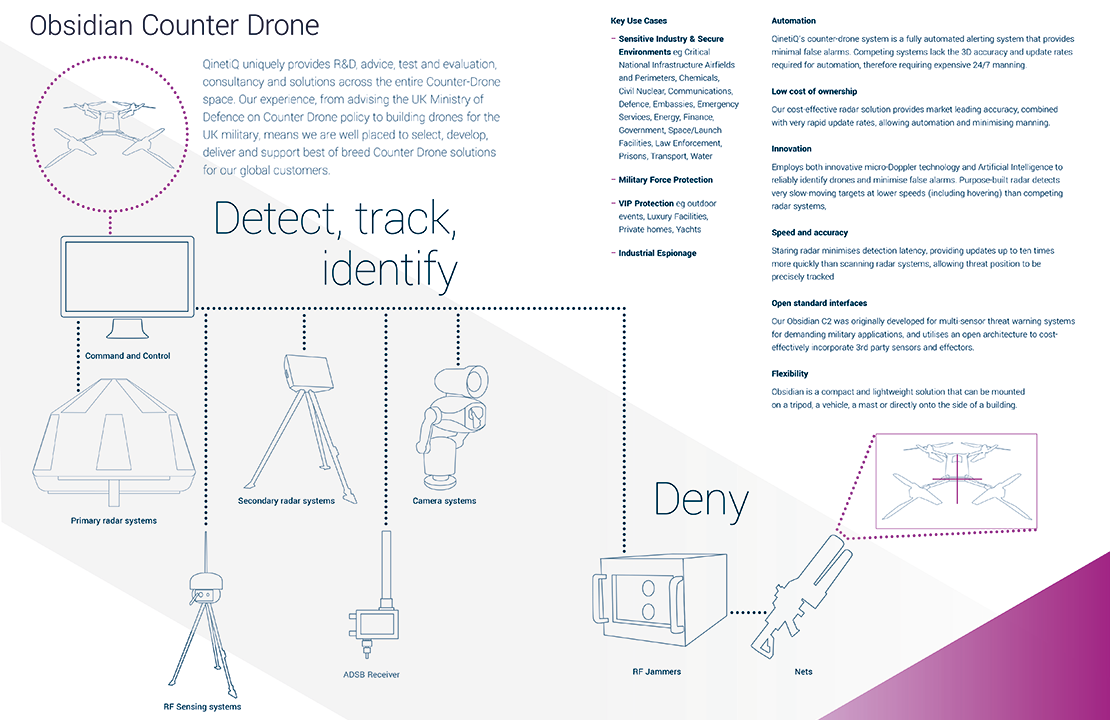 Operational challenge
Airfields are a target-rich environment, presenting challenges for Counter Drone systems. QinetiQ have unique experience from our support to UK MOD in supporting aircraft, operating aircraft test and evaluation (T&E) ranges, and building and operating target drones for T&E. We are therefore well-placed to understand your requirements, and develop site-specific solutions.

Track multiple targets
Necessary for Airport use, and a result of its staring radar technology, Obsidian can track in excess of 100 targets simultaneously, accurately identifying and tracking which ones are drones vs birds, and labelling them accordingly using AI (artificial intelligence). The system camera is automatically slewed to threats, allowing rapid positive ID in a busy control room.

Each back-to-back pair of QinetiQ’s Obsidian 180˚ 3D radars provides 360˚ coverage 90˚ elevation, and 2km range, creating up to a 4km detection ‘bubble’. These zones can easily be extended to multiple locations and controlled within the same network, providing a single interface into a distributed system. Interfaces may be replicated in multiple control rooms for situational awareness where it’s needed. This provides advanced capability that automatically generates alerts without placing additional demands on operators.

Operational Challenge
Recent events have shown that military personnel and equipment are vulnerable to improvised IEDs carried by drones. Drones (sometimes in swarms) are being increasingly used for low probability of intercept surveillance and reconnaissance, not detectable by conventional sensors.

Defeat
Obsidian alerts can trigger defensive counter drone technology to eliminate any close threat. Obsidian is fully interoperable with most effector systems on the market and can be tailored to match user requirements.

Operational Challenge
Critical National Infrastructure and Military facilities have become more vulnerable since the proliferation of low-cost drones. Perimeter Security is no longer enough to stop determined individuals from breaching security and providing significant risk to operations and threat to life.

People of status are increasingly vulnerable to invasion of privacy from the ever-present paparazzi and members of the public. The advent of affordable drones has increased this threat, allowing invasion of privacy in areas which would previously have been safe from being overlooked, such as large private estates or yachts. Detecting and mitigating threats before they get too close can defend that privacy.

Obsidian alerts provide the accuracy needed to evade the prying eyes of drone cameras or activate a counter drone technology. Obsidian’s architecture allows cost-effective integration of a range of Counter Drone effector systems, allowing our customers to choose the approach which best suits their environment, threat, and applicable law.

Our example Use Cases on these pages demonstrate the varied nature of drone threats and customer requirements.

Our customers deliver a diverse range of businesses, their operational imperatives differ, and the nature of the drone threats that they’re likely to encounter can vary widely – in short, no two customer requirements are identical. As a result, it’s becoming widely acknowledged in the Counter-Drone market that there is no ‘silver-bullet’ solution from a single vendor. Rather, solution providers such as QinetiQ increasingly need to draw from a wider range of matured and commercially available equipment and services in order to provide comprehensive robust solutions for our customers.

QinetiQ are ideally placed to develop highly capable mission-critical solutions for our customers. We deliver research & development, advice/consultancy, solutions and services to our global defence, security and civil customers, are uniquely able to draw upon an extensive knowledge and experience base across the entire Counter-Drone space, covering; open architecture command and control systems, active (radar) and passive (Electronic Warfare) RF systems design, imagery analysis and artificial intelligence, and RF directed energy.  Drawing upon our breadth and depth of experience we work with our customers closely to develop customer-led solutions which are fit for purpose, robust, and supported.

What’s required to give me protection?
A core Obsidian Counter Drone system will give 360 Degrees of protection, 2Km in all directions, including directly above. The standard package contains 2x 180 Degree Radars, Tracker, PTZ camera (Different options are available) and the Command and Control interface with two screens for the operator. You will need an elevated stable position to mount the radars, with clear line of sight in all directions. QinetiQ typically work with our customers to understand their specific site/platform requirements and are able to cost-effectively tailor and add to the above to meet specific requirements.

Why is the Obsidian Radar good at detecting Drones?
QinetiQ’s Obsidian Radar was developed following a comprehensive threat analysis research programme, and has therefore been designed from the ground up with Drone detection as its primary use. This means its been optimised for detection and identification of small moving objects in 3D space. Obsidian transmits on a frequency which is especially optimised for detecting the signature created by small motors and rotor blades on drones.

Is the range limited to 2Km?
In short, no. Although the Obsidian radar is instrumented to 2Km, system performance can be extended through integration of additional sensors, including supplementary radars or RF sensing and Direction Finding techniques. Obsidian also provides it’s 2km range in all directions, supporting threat tracking of drones which can fly above conventional longer-range 2D radar systems.

How good is the Obsidian Counter Drone system at classifying targets?
Conventionally, classification of small flying objects at longer distances can be challenging, and can often result in high false alarm rates - alarms from every airborne target over a 20 square km of airspace doesn’t typically deliver customer satisfaction. The Obsidian system uses a combination of sensors and advanced techniques (such as the ‘micro-Doppler’ signature of spinning propeller blades) to detect and classify Drones. The Obsidian Radar as the primary sensor is augmented with and Artificial Intelligence techniques applied to the live video feed provides sufficient target classification. In addition, information from RF sensors can also be overlaid.

Could a target get missed by scanning radar beams?
Obsidian Radar doesn’t have a spinning antenna, or electronically scanning beams, it uses a large array (80+) of static antenna beams to create a ‘protective bubble’ around your location, 360 Degrees around by 90 Degrees vertically. This provides far greater ability to detect and track small objects, prevents drones from flying ‘over the radar’ (as with 2D single-beam radars), and delivers more continuous radio frequency energy on the threat which allows greater target discrimination than fleeting scanning beams.

What sizes of drones are detectable?
Obsidian has been developed to detect and track conventional consumer drones which are available on the high street (such as those from DJI). Detection limits vary with drone type - the general rule of thumb is, the larger the drone the further away it will be detected.

Can Obsidian be used over water?
Yes, Obsidian can be used over water. Obsidian is a Doppler radar system which makes measurements by means of detecting Doppler changes when an object moves. Our staring beam technology is comprised of 80+ beams per radar, allowing us to isolate sea clutter in our lower beams only without adversely affecting performance against air targets.

Who monitors the Obsidian system?
Obsidian is an unmanned system which works 24/7/365 and will only warn you of a drone when certain criteria are met, at which point its camera will be automatically trained on and tracking the target. This allows rapid threat conformation without operator intervention with the system, and appropriate action to be taken immediately. Many competing systems require manual intervention to track threats, raising cost of ownership through the need to man the system.

How big is an obsidian Radar?
The Obsidian radar is a relatively small device which can easily be mounted on a roof or small mast. Its small size means it can be mounted on a building or ship with little impact to the aesthetic of the structure.