Chameleon soft robot automatically camouflages itself with its surroundings

In the natural world, camouflage is a product of evolution that has allowed living things to blend in with their surroundings for millions of years. Military camouflage is much more recent. Indeed, it only really gained momentum when firearms became more accurate in the 19th century.

Now, Korean researchers have developed an ‘artificial electronic skin’ for a robot, allowing it to adjust its hues instantly and automatically to match the background colours it crawls over. This is an example of ‘biomimetics’ (or ‘biomimicry’), a field of research that draws upon inspiration from nature to mimic biological processes and apply them to modern technology.

In this case, the researchers were inspired by the chameleon, which is able to change its colour by using its muscles to expand and contract tiny crystals on an upper layer of its skin. Directly copying the chameleons’ technique would be extremely difficult with current technology, and so the researchers adopted a different approach. Their method was to use a thin liquid crystal layer that changes colours based on temperature. Beneath this layer, they stack several layers of nanowire heaters with different patterns - ranging from dots to grids. Selective heating of these layers creates colourful patterns that allow the robot to mimic its surroundings within seconds. The selective heating is initiated through a colour sensor that is mounted on the robot. Importantly, it is able to change its colour to match its backgrounds in real time.

In the near future, the Korean team plans to add a vision system on the robot, so that the artificial skin can also generate patterns autonomously. Besides robotics, potential applications include colour-changing clothes.

Estimated time to maturity: 5 to 10 years 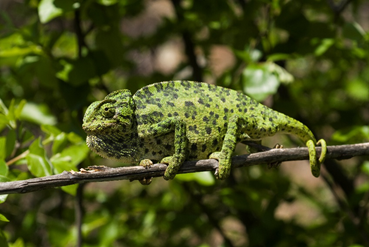