A good way to illustrate the roles Robotics and Autonomous Systems (RAS) can play in today’s operational environments is to look to the past. In this blog, we have created simplified maps of Operation Plunder – one of the key operations in the closing stages of WW2 in Europe.

This map demonstrates a subset of Op Plunder – known as Op Torchlight. On that map, we highlight where RAS technologies could have been deployed, and for what purpose, as an illustration of their potential as part of human-machine teams. Below is a detailed explanation of how they would operate in this scenario:

MEDEVAC UGV
A small wheeled UGV able to carry 1-2 casualties at a time conducts rapid evacuation. Once stabilised, casualties are packaged for transit and brought from point of injury to the nearest aid station.

Fire Support UGV
A light tracked UGV with high mobility and a payload of approx. 3 tonnes carries a variety of direct fire systems and integrated sensors. it can engage targets independently, or as a member of a human-machine team.

Over-watch and Heavy Fire Support UGV
Teamed with other AFVS, this large tracked UGV (up to 20 tonnes) provides heavy direct fire support to its manned vehicle team-mates. Its targeting software allows it to receive situational awareness and targets from other sensors in the battlespace.

Mobility Support
A medium tracked UGV fitted with a combat engineering payload provides mobility support. As manned assets advance, they are likely to face counter-mobility obstacles. This system moves in to deal with those obstacles, but without exposing human operators to high threat areas.

Resupply/Mule
A small tracked UGV (under 2 tonnes) minimises load carriage burden. It can function in two modes – either following a patrol as a “mule”, or conducting resupply operations autonomously. It knows where to go to collect supplies, and how to distribute them in priority order.

Fire Support/Anti-Armour
A small tracked UGV carries a range of fire support and anti-armour effects. This brings a range of capability to Light forces that would otherwise have to be carried by dismounted troops or on poorly protected vehicles.

ISTAR
The FIND function in the Deep battlespace is conducted by a range of UAS platforms, both rotary and fixed wing. This family of systems works collaboratively to perform multi-spectral ISTAR. Advanced analytics minimise operator burden, providing intelligence-driven alerts that allow the cross cueing of kinetic and non-kinetic effects.

Fires
A large wheeled UGV (payload of up to 8 tonnes) carries a GLMRS payload. Operating dispersed, it can deliver effects into the deep battlespace at range – providing a stand-off capability. Upon firing, it immediately performs a “shoot and scoot” manoeuvre so that it can rapidly vacate the launch site and avoid counter battery fire.

Deception
A wheeled UGV carries payloads that mimic the RF/electronic emissions of a larger formation. Further EW/EA modes are also available, functioning within a wider CEMA plan. The autonomy stack is configurable to replicate the movement of other types of vehicle – eg. to imitate a convoy of logistics trucks, or IFVs on the march. 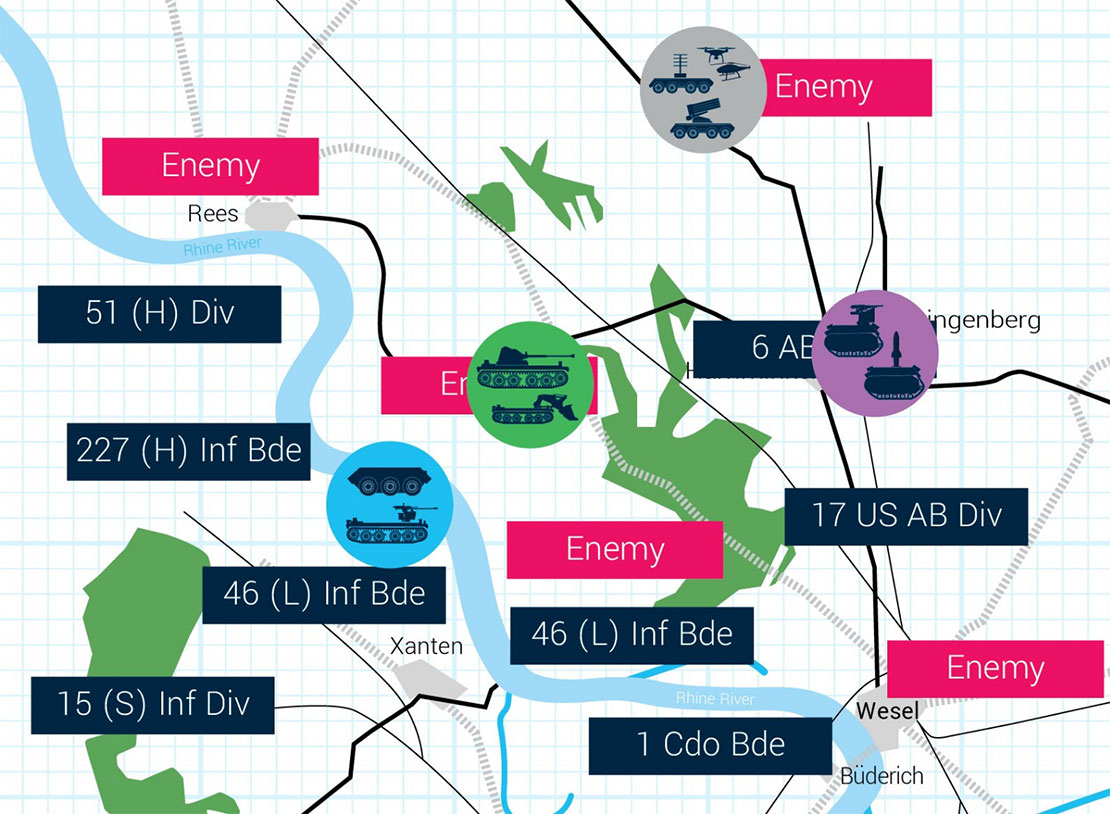