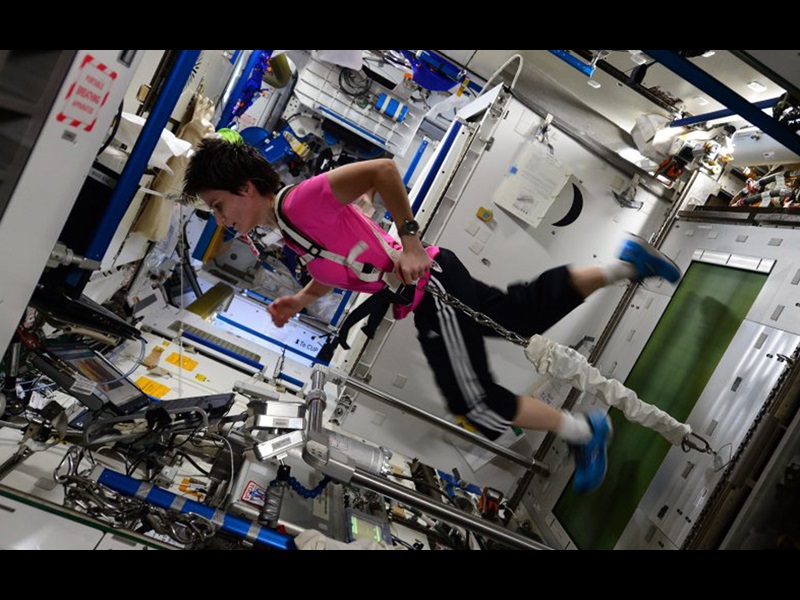 Good luck to everyone running in this year’s London Marathon; to complete it is an amazing feat. If you do find yourself struggling, spare a thought for Tim Peake as he runs the 26.2 miles on a treadmill in space – and perhaps take comfort in the fact that gravity is on your side.

Preparing for a marathon on Earth takes a great deal of dedication, but in microgravity an astronaut must train just as intensively to simply maintain a basic level of fitness. Without adequate exercise, astronauts’ muscles quickly begin to waste away and their bones start to lose density. An astronaut returning to Earth can slowly return to full fitness at home, but a crew landing on Mars would need to arrive fully fit and ready to explore.

Whether an astronaut is running a marathon or flying to Mars, having the means to train is vital, but the microgravity environment poses unique problems. If Tim were to use a normal treadmill in space, he would push off with his foot to take his first step of the race, but leave the treadmill and keep travelling in that direction until he crashed into something.

To prevent this, Tim will be tethered to the treadmill using elastic bungees, known as a Subject Loading System (SLS), which will pull him back down with every step.

So, why should we spare a thought for Tim? Firstly, he has to train longer and harder to achieve the same results as those of us who have the luxury of gravity. Secondly, the bungees don’t behave exactly like gravity – the higher Tim’s stride, the harder they will pull him down, which can cause extra stress and discomfort.

At QinetiQ we have been working with the European Space Agency (ESA) to fix some of these problems. Take a look at the video below and then keep reading, as it may require some explanation:

What you’re seeing here is our next generation of SLS being tested on a ‘vertical treadmill’, currently stationed at the DLR Institute of Aerospace Medicine in Cologne, Germany. The elastic bungees have been replaced with a sophisticated set of gears and pistons, which are adjustable and can maintain a consistent force throughout the stride that is equivalent to gravity on Earth.

The subject lies parallel to the ground and the SLS pulls him or her horizontally onto the treadmill to eliminate the downward force of gravity, allowing us to examine the safety and performance of the equipment and the user’s response to it. However, the true test of the technology is how it performs in weightlessness – so it took to the skies on board a parabolic flight:

Experienced test subjects verified that, compared to bungees, the new technology creates a running feeling closer to that experienced on Earth.

For interviews with the team and more footage of the SLS being tested on the vertical treadmill, see the video below:

More on QinetiQ’s Space Business can be found here