Zero Waste week was founded by Rachelle Strauss in 2008 which began as a national UK campaign to reduce residential and commercial waste, reuse materials and recycle as much as possible. The aim of the campaign is to help businesses, schools, householders and community groups’ increase recycling, reduce landfill waste and participate in the circular economy. The campaign has continued to grow on a regular basis and now has reached participation from 73 countries hosting their own independent weeks.

The following provide more information where QinetiQ has operations:

The concept of Zero Waste is driven through a shared understanding for the need to reduce waste as far as possible to zero in order to maintain environmental sustainability. Inspired largely by the natural eco system that efficiently reduces nearly all organic substances to reusable components to provide new life and growth, this symbiotic life cycle is both sustainable and renewable, providing a well proven model for human adoption.

There is no such thing as waste, only stuff in the wrong place!

The campaign looks to tackle the problem of litter and disposal of many non-organic synthetic materials, such as plastic material packaging and non-biodegradable man-made products, which are producing a global problem to our planet in both volume and toxicity and address methods of reuse and conscientious recycling to reduce the burden on landfill, incineration and environmental pollution / contamination.

Zero waste is a set of principles focused on waste prevention that encourages the redesign of resource life cycles so that all products are reused (Design for Reclamation / Recycling). The goal is for no waste to be sent to landfills, incinerators or the ocean, but to support a circular economy. The traditional linear approach has only single use in mind of which leads to limited reusability and is therefore not in tune with customer demand for responsible products. For example, the defence industry which is prominent for the production of e-waste, designing a product with material that can easily be recycled like (but not limited to) aluminium.

“In our current economy, we take materials from the Earth, make products from them, and eventually throw them away as waste – the process is linear. In a circular economy, by contrast, we stop waste being produced in the first place.”
Ellen MacArthur on the basics of the circular economy

The circular economy is based on three principles, driven by design:

It is underpinned by a transition to renewable energy and materials. A circular economy decouples economic activity from the consumption of finite resources. 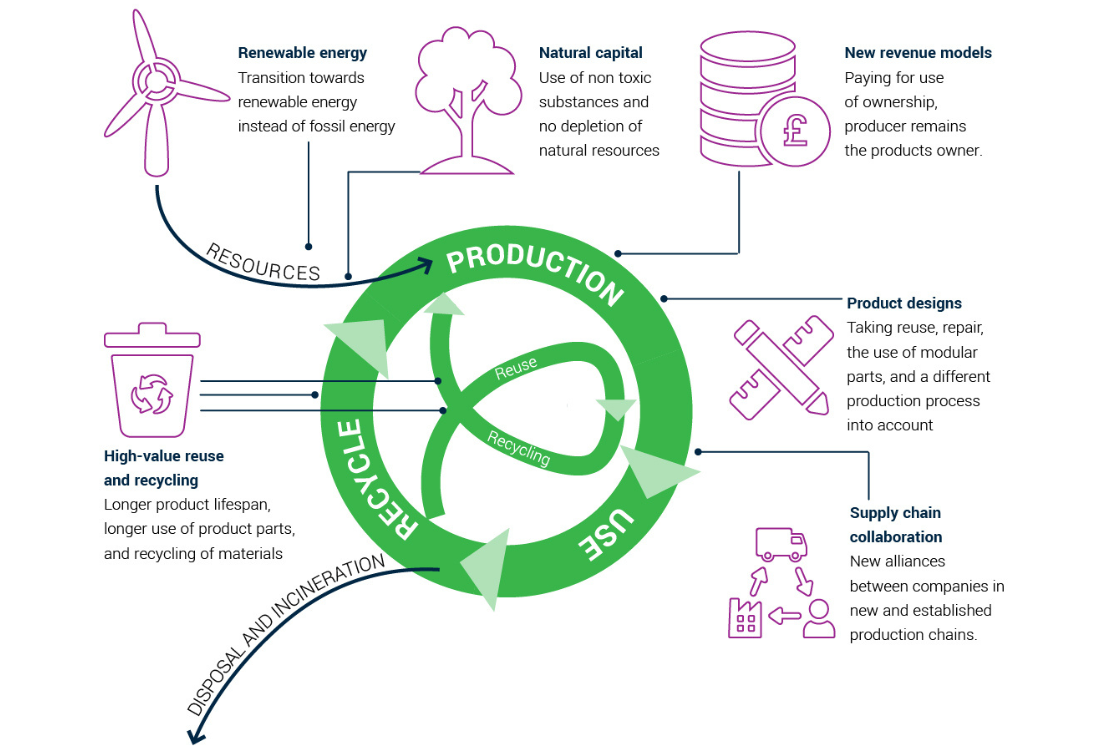 A world of waste

Waste generation has increased massively around the world in recent decades, and there are no signs of it slowing down. By 2050, worldwide municipal solid waste generation is expected to have increased by roughly 70% to 3.4 billion metric tons. This is due to a number of factors, such as population growth, urbanisation, and economic growth, as well as purchasing behaviours.

If all this waste was put on trucks they would go around the world 24 times. 99% of what is purchased is disposed of as waste within 6 months! If all nations behaved like the western world, we would need 5 planets to support and absorb our waste.

We are seeing a global crisis in waste management policy, resulting in our waste being sold by developed countries to poorer developing nations, where according to the World Bank, over 90% of waste is disposed of in unregulated dumps or openly burned. This leads to health, safety, and environmental risks to the communities they are located in, whether through the spread of disease or exacerbating global warming as high amounts of methane are released. This practice is known as the global waste trade or sometimes referred to as ‘toxic colonialism’.

As good corporate citizens, we have an obligation to ensure that our waste providers are credible and reputable.

Over the past two decades, the UK’s waste sector has transformed from an ‘out of sight, out of mind’, landfill-dependent model, to one where the waste hierarchy is adopted, prioritising recycling and energy recovery over landfill disposal. Our waste provider, Biffa, is an established enabler of the UK circular economy with a team of more than 10,000 colleagues carrying out essential services every day in line with their purpose ‘to change the way people think about waste’.

Sustainability has been at the heart of Biffa’s business strategy for many years, and they’ve made huge strides during this time. They have invested in surplus redistribution, plastic recycling, energy recovery infrastructure and low carbon collections, leading to a 70% reduction in their carbon emissions since 2002. Their areas of investment essentially reflect the waste hierarchy – to Reduce, Recycle and Recover, all supported by the need to Collect.

Key highlights since the launch of Biffa’s sustainability strategy in 2020 have included:

Biffa’s sustainability strategy will see them unlock around £1.25bn of investment in vital green economy infrastructure by 2030, of which £1bn has already been unlocked, while further reducing their carbon by 50% by 2030 from a 2019 baseline. They aim to have net zero emissions by no later than 2050.

Plastic waste is projected to triple by 2060, according to the latest forecasts by the OECD’s Global Plastics Outlook, rising from 353m tonnes of waste in 2019 to 1bn tonnes over the course of the next 4 decades. 2/3 of this is expected to be made up of packaging.

Recycling rates are expected to improve in this time, rising from the 9% in 2019 to 17% in 2060. While population growth is one reason for the coming surge, another driver is economic growth. A bigger, urban population means greater demands, production and spending power.

As industries make the effort to become more sustainable, it is hoped that new technologies will be one means of lowering plastic intensity in the coming years. This is in addition to the need for an implementation of policies focused on cutting down on plastics demand, encouraging people to repair and reuse products rather than to throw them away and improving waste management methods, including recycling.

So what can we do to reduce waste in our business?

In QinetiQ, many of us have the opportunity to influence the reduction of waste through our roles. In addition, as individuals, there are a range of choices we can all make:

We currently have a waste target that we report year on year in the annual report. As part of our Net Zero plan and wider environmental stewardship programme, we will be looking to continuously improve the way we address waste.

Society has normalised wasteful consumption. Driven by the urge for 'self-completion' rather than material need. We need to evolve our thinking and follow the principles of the waste hierarchy:

Thank you to Charlotte Scallon - Head of Sustainability at Biffa for her contribution to this blog.