At the Edge of the Cloud

Military forces need to operate in various austere environments with minimal infrastructure, making the use of information technology a challenge. Whilst Cloud computing is a current trend, it relies on high quality and reliable network infrastructure between the Cloud and the client device(s), which cannot be guaranteed in complex operational environments. As such, processing at the front line (or ‘edge’) - is becoming increasingly desirable.

The Cloud has been a major driver of compute power, but has its limits in a defence context. For example, cooled server rooms served with regular software updates are a luxury that deployed military forces don’t have. Distributed computing offers low latency (fast response times), with an appropriate amount of compute power sized to the end user's need, reducing the need for highly scalable centralised Cloud platforms, whilst also lowering the risk of electromagnetic interference.

What can we do with Edge Computing? Some examples

Edge Computing has many applications for defence. For example, a network of unmanned aerial systems (UAS) could be deployed as intelligence, surveillance and reconnaissance (ISR) assets, using their sensors to gather information on a target. By doing their computation on-platform through Edge Computing, they could process all the input from their sensors on platform - for example; cameras, infrared (IR) and electro-optical (EO) systems - and then communicate with each other in a “mesh network” - leveraging the power of the hive (in this case, a distributed cluster of UAS assets) in order to make decisions as an autonomous entity.

In other examples, micro edge systems could be retrospectively deployed into existing manned assets in order to increase their operational effectiveness. Given the low power requirements of edge computing, making existing assets “smart” is a simple way of increasing the usefulness of existing platforms, whilst making them 21st-century-ready for battle in an information dominated environment.

Edge Computing is clearly becoming increasingly important in defence and security, but the quality of the edge device is determined by the amount of data it has access to and the amount of compute power it can leverage. Up to now, we have been able to depend upon the inexorable advance of Moore’s Law as a means to access more computational power - however, Moore’s Law is starting to reach fundamental limits imposed by the size of electrons themselves (after all, you can only miniaturise so far), so we may be coming to a point where specialised software architectures are required to facilitate the processing power that we need.

There are hundreds, perhaps thousands, of vendors in the edge computing space, which means that interoperability standards will be required in order to ensure compatibility and overall success. Defence has a key role in helping to define these standards to support a truly multi-vendor landscape. QinetiQ is OEM (original equipment manufacturer) and vendor agnostic, and we embrace a multi-vendor environment. We keep a watching brief on Edge Computing and have various active projects in the area of Edge and AI. For example, we have AI-processing projects looking at implementing object recognition software through machine learning onto very small form factors for use on small UAS. A previous project, Urban Canyons, explored how artificial intelligence and machine learning can assist military vehicle crew information management and decision making in an urban environment.

Moving forwards, we can envision a future where Cloud and Edge based computing works synergistically for deployed forces; combining the powerful network effects of information sharing with the localised resilience of a platform that does its own processing.

Download the Wired x QinetiQ report to find out more about Edge Computing alongside another five science and technology trends set to change the world.
Get the report > 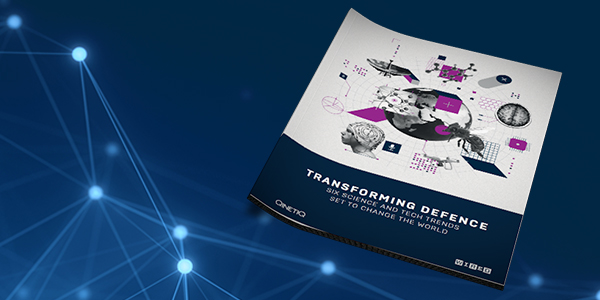